Skip to content
IN STOCK ORDERS SHIP IN 1-2 BUSINESS DAYS!

The first product we ever engineered, the Builtright Industries Rear seat release was made to make your life easier. It’s a simple solution to accessing the area behind the rear seat backs of your truck. Designed with an OEM-inspired nylon pull strap, releasing the rear seat latch is effortless. The bracket firmly holds the latch pull in place and also guides the strap towards the top of the seat for easy reaching. It works hard so you don’t have to.

2015 - 2020 F-150/Raptor Supercab and Supercrew: These models store OEM tool kit behind the passenger side seat and use one latch release kit for the driver's side. 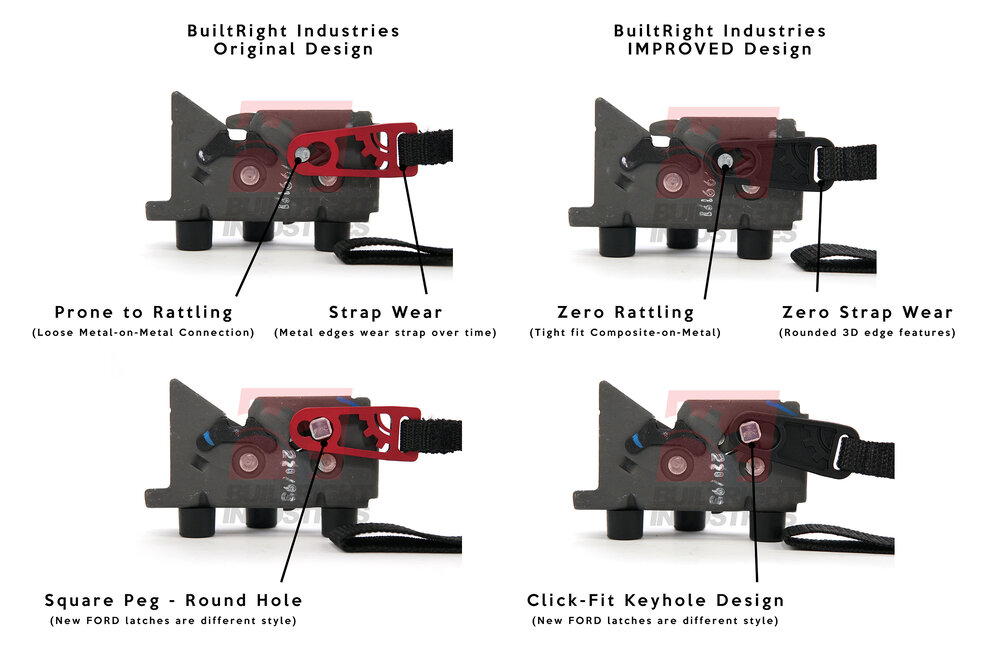 Installation of our Rear Seat Release takes just a few minutes using a T30 torx bit and something like a closed end wrench to release the seat latch. Check out our video below!

Add a T30 Torx Bit to your order

BuiltRight is an engineering company before all else and we're obsessed with great mechanical design. Each product has a story of ideas, innovation and iteration until it's just right.

It's in the name. Our mission is to build great products using the best materials and processes every single day. We don't cut corners to save money or compromise to save time. We build things right and we stand behind them. Our no-BS Lifetime Warranty stands behind them as well.

We're wrench turning, beer drinking guys just like you and we've been known to throw the occasional tool or four letter word when an install is needlessly difficult. We only design parts for trucks that we own and we work hard to spare you the busted knuckles and frustrating nights in the garage.

Thank you for submitting a review!

Your input is very much appreciated. Share it with your friends so they can enjoy it too!

FacebookTwitter
Be the first to review this item
Filter Reviews:
×
Clear filters
More Filters
A
07/21/2021
Anonymous

Easy and quick to install. Worked as advertised. Great product.

Most of the time, the latch does not catch on the bar behind the seat. It usually takes me 10-20 tries to get my seat to stay but when this product is off, it catches right every single time.

If you have ruled out the catch bar on the cab wall moving out of position along with the seat base not being lifted while closing then its most likely the OEM latch mechanism. We've found that some of the newer latch mechanisms are quite stiff form the factory relative to the older ones. Use a little grease on the latch and try cycling the latch mechanism a bunch of times to help break it in. As always, if you're unhappy with the product just shoot us an email at support@builtrightind.com and we'll make things right! -Matt H.

This is the second one I have purchased for my F150 had this on my 2016 now on my new 2021 great product! Works great for its purpose! Very easy install!

Easy and very effective. Love it